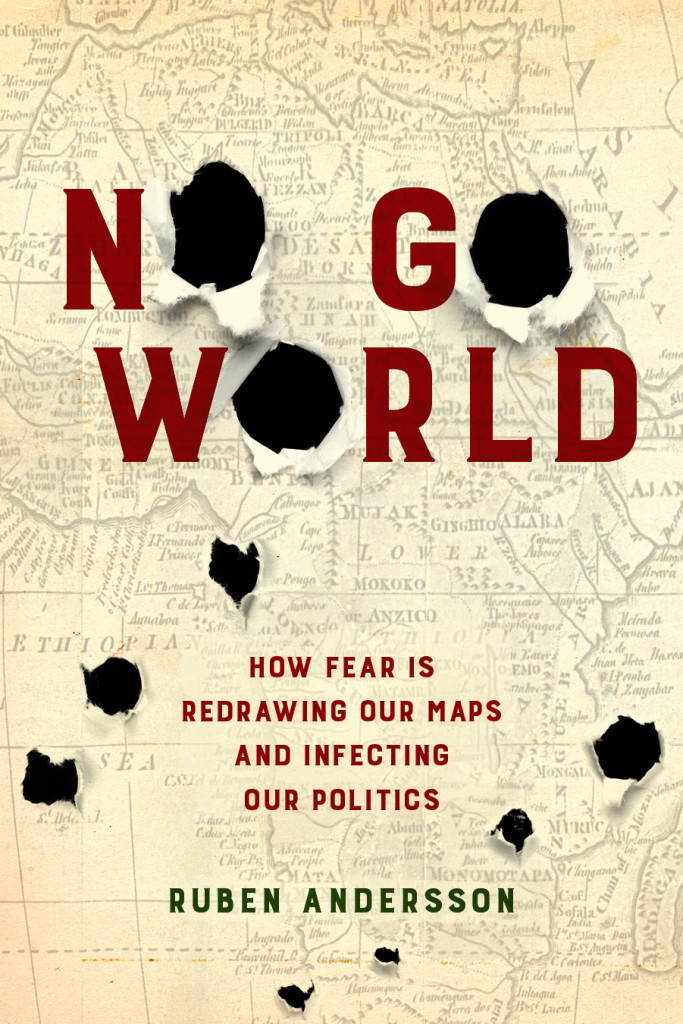 No Go World: How fear is redrawing our maps and infecting our politics, published by University of California Press in April 2019. This is the Preface (see below for more links):

In London’s King’s Cross, deep in the vaults of the British Library, there exists another world. It is minute and perfectly round, gold-flecked and held in God’s almighty grace, and it is yours for an hour if you order it by the counter. One spring day I sit in the hushed halls, looking for this world in a Kindle-sized book, turning page after crisp page stained with the nicotine of time. Manuscripts rustle behind me and a keyboard clicks in the distance, and suddenly, there it is—a thirteenth-century map, vast in its smallness; Asia on top, Jerusalem in the middle, Europe and Africa down below. The African corner hosts a menagerie of monstrous figures, headless and dog-faced, kept in a neat line of pens touching the very margins of the known world. In their opposite corner, in Asia, a wall circles the abject lands of Gog and Magog, cannibalistic races locked up until Judgment Day. Christ stands guard above it all, golden-aura’d and hands aloft, while dragons lurk below. This medieval world is navigable like a London Underground map—a perfect circle of Christian knowledge in which monsters squat at the margins, held in God’s delicate grip like the page between my fingers.

A few stops down the Tube from my British Library hall lies the Cottons Centre, a corporate monolith with high-spec views across the Thames to the City of London. There, suited risk analysts are busy building a digital map for the twenty-first century, navigable not for Christ’s pious followers but for big business. Their world is not shielded by divine hands or flecked with gold; instead it is painted in shades of risk, from light green to wine-red. Unlike its medieval counterpart, the Risk Map’s margins are safe and pale while its central zones are slathered with the deep reds of danger, from the Sahara to Tigris to the Hindu Kush. Zoom in and you will see the red blots bleeding outwards, encroaching on the Mediterranean and trickling toward Texas, like pools of blood gathering at a shuttered door. On the Risk Map there are no visible monsters, no Christ to contain them, and no walls or cages to keep them at bay: instead they roam wild and unseen, spreading their beastly trace as they move.

This is the story of our world of encroaching danger, of why it bleeds, and of what we may do to stop it being stained by scarlet shades of fear.

No Go World is available at all the usual online outlets including Wordery and Amazon. Use code 17M6662 for a 30% discount at checkout via the ucpress site (online ordering in US and Canada only); in UK and Europe, via John Wiley & Sons +44 (0) 1243 843291; elsewhere see https://www.ucpress.edu/contact/customer-service.

‘We need to snap out of the crisis mode and take a step back’ – European Council on Refugees and Exiles, May 2019

Also see the Allegra Anthropology Lab for a Book Forum on No Go World, including reviews here, here and here.

‘How the West is withdrawing into a bunker of its own making,’ The Conversation, June 2019

‘Anthropology at, and of, the limit,’ response to Allegra Book Forum reviews, September 2019

See also coedited special issue in Social Anthropology on the ‘Return of remoteness‘, June 2019 (with Martin Saxer); the Current Anthropology article, ‘Here be dragons: Mapping an ethnography of global danger’, December 2016; and the coauthored piece ‘Double games: Success, failure and the relocation of risk in fighting terror, drugs and migration’, October 2018 (with David Keen).